Sidcup Recreation Club Tennis has 3 floodlit, well maintained hard courts one of which has just been re-surfaced. Our members can book courts up to 2 weeks in advance,or  you can just turn up and play on any unbooked court.

We are currently having talks with some local coaches and are hoping to be able to provide coaching for both adults and children in the the summer (2018).

We have regular social tennis sessions, both during the week and at weekends when members who want a friendly game are able to come along and make up doubles to join in with others, but for those of you who are more competitive, the Club has a ladies, mens and mixed doubles team competing in inter-club leagues throughout the year. We also hold a fun ‘American Doubles’ tournament with food every August and have a Club championship (singles and doubles) throughout the summer with the finals being played in September.

In the Autumn we have a Tennis Dinner & Dance  where championship prizes are awarded and both tennis and social members of the Club can enjoy themselves. 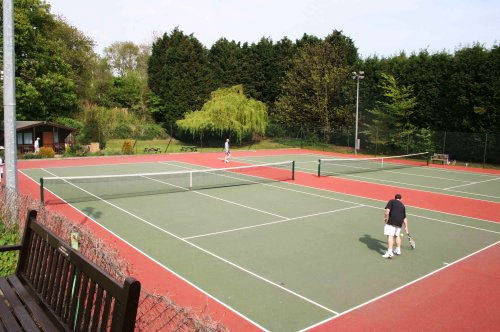